Montessori Mobiles: Materials in the Spotlight

In their first weeks of life, babies begin to focus their eyes and track objects. These small acts of visual control provide an important foundation for newborns who are building their neural networks. To set infants up for success, we offer a series of specially designed Montessori mobiles to aid this development.

Each mobile is created with particular characteristics to help babies further develop their sense of sight, depth perception, concentration, hand-eye coordination, and more. Plus, newborns love them!

Montessori mobiles follow a progression that parallels infant development. The first mobiles have a visual focus and begin with basic shapes. They progress to include more complicated objects and eventually become interactive and tactile.

The first mobiles are simple and light enough to allow them to flow with gentle air currents. In order for infants to have the best visual experience, a mobile should be hung so that it is about 12 inches in front of them rather than directly above. When babies are lying on their back, there should be a visual line at about a 45-degree angle from their eyes to the mobile. This particular placement allows infants to see the whole mobile moving.

Each mobile has visual components designed to help infants track the objects and sharpen their vision. Then after these opportunities to follow objects visually, infants begin to have more arm and hand control and might begin to reach and grasp objects nearby. To support this new ability to reach and grasp, the mobiles take a slightly different form and thus need to be easy to grasp, colorful, and safe for children to mouth.

The first four mobiles–the Munari, Octahedron, the Gobbi, and the Dancers–provide babies with meaningful visual experiences when they are just recognizing shapes and then later identifying colors.

Newborns can only see black and white, so the first mobile we offer does not have any colors and is composed of black and white shapes with contrasting borders and a hanging glass sphere. The hanging glass sphere reflects light and captures infants’ attention. Named after Bruno Munari (1907-1998), an Italian architect who created a series of mobile sculptures that created patterns of light and shadow, the Munari provides newborns the possibility to begin to focus on one object and experience the difference between light and shade.

Children start seeing color around two months of age and this mobile introduces primary colors, as well as three-dimensional objects. The traditional mobile has three octahedrons–one red, one yellow, and one blue–made of glossy, reflective paper. Light reflects off the shiny paper and attracts the infants’ attention. Although other simple geometric shapes can be used, it’s best if they have straight lines. When the shapes move, their movements simulate a circle. Although typically introduced around two months of age, the mobile can be used as early as one month of age, because some babies may already be seeing colors and those who aren’t may be encouraged to see the new colors.

We introduce this mobile around one or two months of age, but after the Munari and Octahedron. The Gobbi is made of five spheres hanging from a horizontal rod. The spheres are covered with embroidery floss and have graduation of one color from light to dark and hang in a progression on a 45-degree angle so that the darkest sphere is lowest and the lightest sphere is highest.

The Gobbi was designed by Gianna Gobbi (1920-2002), Dr. Maria Montessori’s assistant in the early 1950s. Created specifically for a Montessori environment, the Gobbi helps babies begin to see a gradation of colors and sharpen their visual abilities.

This mobile is made with light, metallic paper of two different colors. The paper is cut into shapes and hung in a way that resembles four dancers. The parts move with the slightest current of air and light plays off the mobile as the dancers spin around.

This mobile moves faster, has parts with two colors, and has shapes that aren’t as definite due to each part within the dancer moving separately. These new visual components help babies with depth perception and focus as they track the different movements of the shapes.

The next four mobiles–Stylized Wooden Figures, Three Colored Spheres, Bell on a Ribbon, and Ring on a Ribbon– represent a shift toward objects that babies can not only track visually, but also reach for, potentially grasp, and also even pull. For that reason, these mobiles need to be attached very securely!

The first of these visual and tactile mobiles is made of light wooden shapes that are ideally realistic figures that could actually fly and move, such as birds, butterflies, or airplanes. If they are painted, the paint should be non-toxic.

In addition to being at an angle for the child to see, this mobile and the subsequent mobiles also need to be hung at a distance where the child can stretch and be able to grasp the items.

Made from interlocking circles that form an impression of a sphere when they spin, this mobile is a more tactile version of the Octahedron mobile. Each of the three spheres is a primary color (painted with non-toxic paint, of course), which makes the spheres very contrasting. Because they are made from interlocking wooden disks, the hanging objects also provide babies with four sides that are relatively easy to grasp.

Bell on a Ribbon

The Bell on a Ribbon is a wonderful mobile to use when babies begin to spend more time on their stomachs, or even when they start to be able to sit. Because of this change in the children’s positioning, the mobile height may need to be adjusted.

In the beginning, babies will hit the bell by accident, then they will gradually begin to try reaching for the bell to make the sound again. When babies make contact, the bell moves and they must work harder to grasp it. The bell can also be enclosed inside a crocheted covering.

The ribbon should be attractive enough to see, but not so colorful as to distract attention away from the bell. Although attached securely, the bell should still be large enough to not be a choking hazard.

Finally, for added interest, babies can also be positioned so the bell is at their feet so when they kick it will jingle!

Ring on a Ribbon

This is the last of the mobiles in the Montessori progression and helps babies use more precise movements in order to be able to grasp the moving ring. This simple wooden ring hanging from a ribbon or elastic offers so much benefit as babies reach, grasp, release, and try again. After babies are able to grasp a thick ring, the ring can be switched out for a slightly thinner version. Older babies may also use this material to pull themselves up.

Setting the Scene for Montessori Mobiles

In setting up an environment for newborns, one of the key areas is a place for movement. The movement area includes a mat and a hook on the ceiling for hanging the mobiles. It’s ideal for the movement area to have a mirror next to the mat, especially because babies are developing the ability to hold and control their heads. As such, they can look at the mobile in the mirror if they need to have their heads to the side.

Montessori mobiles are meant to be used in a movement area, rather than above a changing area or sleeping area. Interacting with the mobiles is important work for babies and they need prepared space for that work. The area should have natural light and enough airflow to move the mobile, while also being warm enough to be comfortable.

Because babies are really engaged when they are focusing on and reaching for mobiles, we want to be sure to allow them to concentrate. Before making a change or interrupting in any way, we take time to observe and wait for when focus shifts and babies show signs of being finished. We start by offering the mobile for short periods of time and then take a break if babies seem to be overstimulated. The best time to use the movement area and the mobiles is when babies are fed and well-rested.

Montessori mobiles offer so many benefits for our babies. During their time with mobiles, infants practice visual tracking, develop their fine and gross motor skills, strengthen their intentional and coordinated movements, and learn how to execute a planned action. Although seemingly simple, these materials for infants are incredibly profound!

A message from the Admissions Director

Our Mission is Your Child
Every teaching method sparks moments of learning. At the Winston-Salem Montessori School, we turn that spark into a lifelong flame. Visit our Admissions Center to learn more about our easy admission process.

Ready to speak with someone?
Schedule a free virtual tour for a conversation about our unique approach to learning. 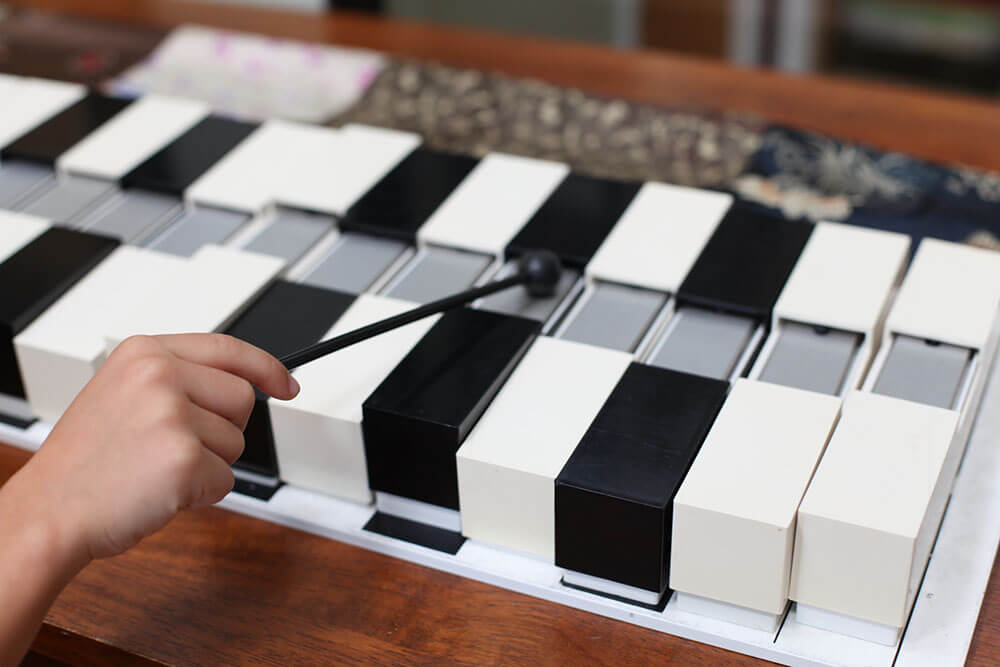 Music. It helps us express ourselves. It expands our consciousness. It draws us together. Since ancient times, humans have relied upon music as a fundamental form of communication. Even today,

Montessori classrooms depend upon a web of mutual respect. This culture of respect is established from the very beginning: from how the classroom is arranged and sized for the children, 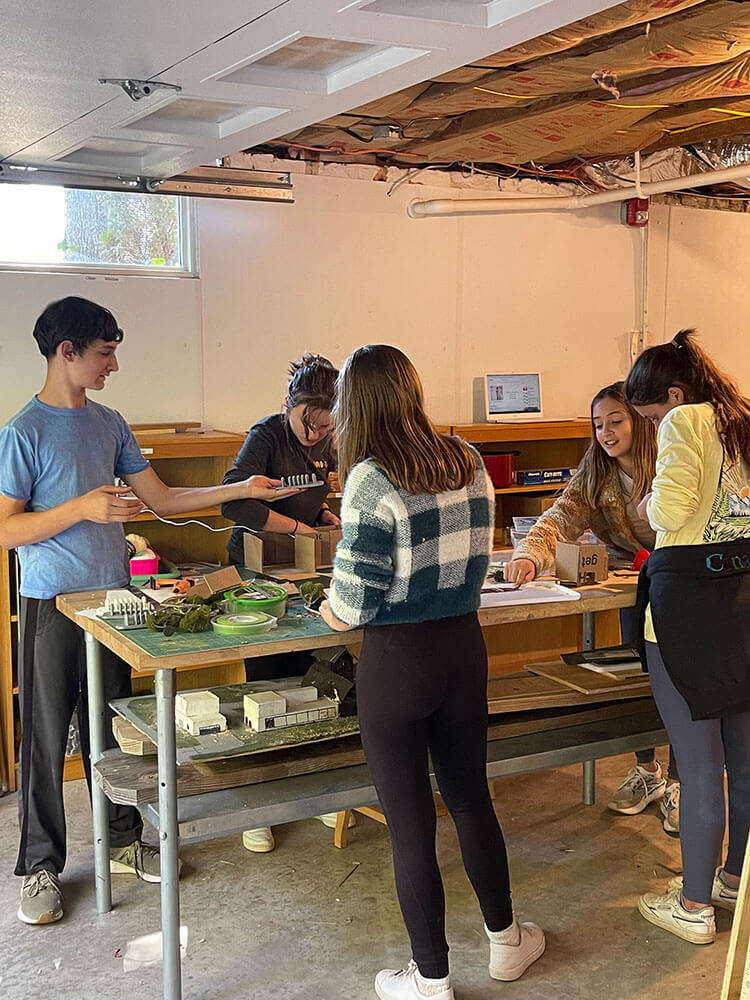 As we adapt, learn, and exist in the world, we rely upon unconscious, innate drives that help us orient, explore, work, order, calculate, imagine, abstract, communicate, repeat, and self-perfect. In